Morgan Stanley: 3 Reasons Why The Correction Has Further To Go Before It’s Over

The Moment of Recognition

It’s hard to believe a year has passed since the lockdowns first began. The good news is there appears to be light at the end of the tunnel, with case counts and hospitalizations plummeting. At the current pace of vaccinations and with spring weather right around the corner, several health experts are talking about herd immunity by April.

Meanwhile, Congress is putting the finishing touches on another fiscal stimulus which may top US$1.5 trillion. When combined with the progress on the virus, it’s hard not to imagine an economy that’s on fire later this year. Finally, earnings results for 4Q proved to be spectacular, with the median company in the S&P 500 reporting double-digit year-on-year EPS growth. In short, the recession is effectively over.

With all this good news, why have equity markets struggled for the past few weeks? In my view, it’s really not that complicated, or surprising. 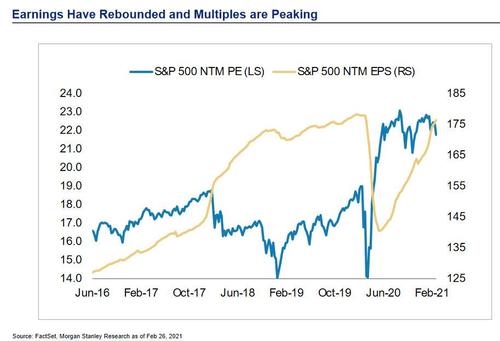 I thought the correction at the end of January was the beginning of something more meaningful. Instead, most indices roared back one last time before this more sustainable correction ensued. It’s likely a continuation as many high-flyers never made a new high in February and are now leading on the downside.

Three things tell me this correction has further to go before it’s over:

1) The non-linear move in 10-year yields has awoken investors to a risk they thought was unlikely, if not impossible. So, while the Equity Risk Premium (ERP) held constant during this rate move as we expected, it may now move higher in anticipation of the next 50bp jump in rates. In other words, the equity market now knows the 10-year yield is a “fake” rate that either can’t or won’t be defended. To that end, the Fed did expand its balance sheet by US$180 billion in February, 50% greater than its target. Yet, rates surged higher. Markets lead the Fed, not the other way around, and we are now at that moment of recognition.

2) March represents the anniversary of the market crash last year. This means there will be a big shift in the top and bottom quintiles of 12-month price momentum by the end of this month. Most of the stocks going into the top momentum quintile are value and cyclical stocks like banks, energy and materials – areas we like. Conversely, many of the stocks moving out of the top quintile are tech and other high-growth stocks – areas we don’t like at current prices. We started writing about this coming momentum composition change back in December as a potential risk and opportunity (Exhibit 1). Part of the rotation from growth to value has been due to better relative fundamentals, as the economy recovers, and cheaper valuations. However, as these value stocks move into the top quintile of price momentum and growth stocks move out, the rotation might accelerate even further. This could be quite disruptive to portfolios and lead to another round of deleveraging like in January. 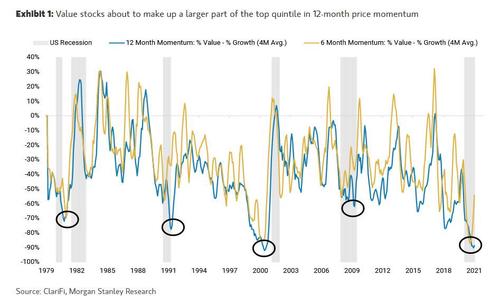 3) Based on the technical damage to date, the Nasdaq 100 appears to have completed a head and shoulders top and should test its 200-day moving average (-8%).

Finally, everything that’s going on now should be expected at this stage of a recovery from recession. After the big initial surge, the stock market tends to consolidate as interest rates rise and P/Es compress. This is why our year-end target of 3900 for the S&P 500 is toward the lower end of most sell-side strategists.

The bull market continues to be under the hood, with value and cyclicals leading the way. Growth stocks can rejoin the party once the valuation correction and repositioning is finished.