A small group of Greenpeace activists have bypassed security at Roissy-Charles de Gaulle airport in Paris on Friday and painted an Air France commercial jet green.

An Air France Boeing 777 received a new paint job after nine Greenpeace activists spattered the aircraft with green paint. The eco-warriors allegedly scaled a perimeter fence of the airport Friday morning, according to AFP. 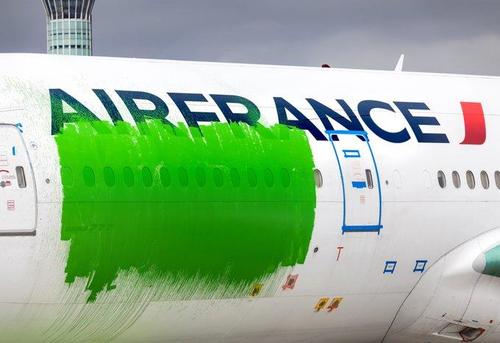 One Greenpeace activist documented the protest on social media. Some of the members were seen ‚greenwashing‘ the side of the 777, while others used ladders and held signs that read: „Is there a pilot to save the climate?“ and „the solution: fewer planes.“

In a post titled „[ACTION]: The green plane will not save the climate,“ Greenpeace stated:

This morning, Greenpeace activists entered the tarmac at Roissy-Charles de Gaulle airport to denounce the government’s greenwashing on air transport. Faced with the climate crisis, it is necessary to regulate and reduce air traffic so that it is compatible with the Paris Agreement, while anticipating the reconversion of this sector and the social consequences that this would have for all workers. and affected workers.

A few days before the start of parliamentary debates on the „Climate and Resilience“ bill, we would like to firmly remind you that the technological innovations so much praised by the Minister for Transport, Jean-Baptiste Djebbari, will not be enough to stem the climate crisis. The regulation and reduction of air traffic are essential. At present, the measures proposed in the bill on this subject are far from up to the mark. Especially:

Airport extensions : they would still be possible, while these climatic aberrations must be abandoned. In France, more than a dozen projects of this type are already planned at the moment and would not be affected by the current bill!

Development of rail alternatives  : there is simply nothing new on this subject in the bill, while we need to speed up the relaunch of the rail offer, so that the train is a solid and accessible alternative everyone.

The bill is also very insufficient on the issues of taxation of the aviation sector and gives pride of place to the logic of carbon offsetting which provides a loophole for the aviation sector, while all sectors must in fact reduce their emissions in the air transport sector. absolute.

With flying being a controversial topic in climate debates, the Air Transport Action Group has previously noted the global aviation industry produces around 2% of all human-induced carbon dioxide (CO2) emissions. One would think that figure would be much higher…

Despite raising awareness for climate – the brazen unlawful entry of the Roissy-Charles de Gaulle airport raises security questions that a group of people can easily approach a commercial jet.