Authored by Michael Maharrey via SchiffGold.com,

The Fed won round 1, thanks to a little help from the Aussies.

But even the mainstream seems to have noticed that this wrestling match isn’t over and the Fed may be forced to take real action soon.

As Ranasinghe put it, “Round Two, and perhaps even Round Three, are inevitable, and they may require policy action rather than just words.” 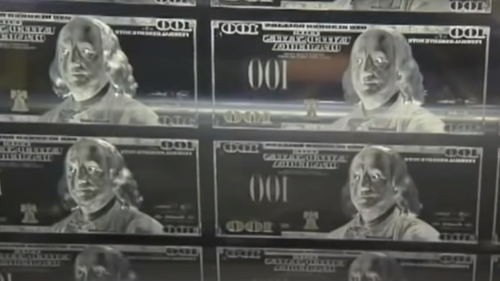 The bond market got clobbered on Friday. As prices fell, the yield on the 10-year Treasury pushed as high as 1.61% and the 30-year hit 2.4%. These rates aren’t high by historical standards, but Peter said it was one of the biggest interday moves in the bond market that he’s ever seen. Up to that point, stock markets hadn’t reacted much to rising interests rate, but on Friday, they sat up, took notice, and threw a tantrum. The Dow dropped some 480 points.

The bond market bloodbath on Friday is part of a larger trend. Yields have been pushing upward for weeks. Conventional wisdom tells us that this is due to a quicker than expected economic recovery and this may force the Fed to tighten monetary policy sooner than expected. This is precisely why we’ve seen the big selloff in gold. A lot of people actually believe the Fed is going to reverse course on its monetary policy.

But Fed officials have been working diligently to jawbone this notion away. Jerome Powell testified on Capitol Hill last week saying he doesn’t expect inflation to reach the 2% target for at least three years.

But Peter says there is a reality out there that nobody wants to acknowledge. Bond yields are not spiking because the economy is strong. They are spiking because of inflation – Powell’s assurances notwithstanding.

Bond yields are going up because there is a massive supply of bonds because we have massive deficits. And even though the Fed is buying a lot of bonds, they ain’t buying enough. So, those extra bonds, there’s no buyer, and so the price keeps falling.”

The reality is that talk isn’t going to be enough to keep a lid on rising interest rates. And this Reuters article reveals that at least some people out there in the mainstream get it too.

Reiterating such messages [that inflation isn’t a problem and loose monetary policy will remain in place for years], alongside interventions by smaller central banks such as Australia and South Korea, calmed bond markets. Bets on early-2023 Fed rate hikes have ebbed.”

Reuters mentioned Australia. The fact of the matter is the Reserve Bank of Australia stepped in and did the Fed’s dirty work this time. On Monday, the Aussie central bank announced plans to double its quantitative easing program.

After the big selloff Friday, stock markets rallied on Monday, with the Dow up better than 600 points. As Peter noted, very few people in the US mainstream financial media connected the rally with the RBA’s policy move.

Nobody was really talking about the fact that our rally was made in Australia. But it was. And the significance, I think, of what the Australian central bank did, is I think it created an implied put here in the US market. Because I think when traders looked at what the Reserve Bank of Australia did, they assumed that the Federal Reserve would ultimately do the same thing, which is exactly what I’ve been saying the entire time.”

The Reuters analyst seems to get this. Ranasinghe identifies the stock market bubble blown up by the Fed.

Central bank stimulus that crushed borrowing costs to below inflation has fed an equity bull run that has added $64 trillion to the value of global stocks since 2008. Higher yields would put that entire edifice at risk.”

Then Ranasinghe accurately observes that the Fed has consistently played the role of white knight, riding in to rescue the market when necessary.

The shifting power balance [between the markets and the Fed] became evident in 2013 when a market tantrum forced the Fed to backtrack on plans to start withdrawing stimulus. Another market revolt erupted in late 2018, egged on by then President Donald Trump. The Fed soon pivoted from raising rates to cutting them. So markets have seen this movie before.”

And Ranasighe understands that the Fed really can’t let interest rates rise when the entire economy is predicated on cheap money.

What happens in sovereign bond markets matters because higher yields here raise borrowing costs for companies and households. As capital flow slows, so does economic growth. And higher yields are harder to stomach in a world that has racked up an additional $70 trillion rise in debt since 2013.”

Given the realities, it’s not hard to predict what the Fed will do. The central bank will do exactly what Peter Schiff has been saying it will do. It will boost QE.

If the Australian central bank has already panicked and is increasing the size of its QE program, not to help the economy but to stop interest rates from rising, why wouldn’t the Federal Reserve do the same thing? After all, all of these central bankers are using the same playbook. So, I think what happened is now the markets are starting to realize that they don’t have to worry about a big increase in interest rates because if there is more significant upward pressure, if the bonds really start to fall, then the US Federal Reserve is going to do exactly what the Australian Reserve Bank did, and it is going to increase the size of its asset purchase program – QE – and is going to start buying more bonds to prevent bond prices from falling and to prevent interest rates from rising.”

The Fed could be put to the test sooner rather than later. Next week, the Fed will auction 3-year and 10-year bonds. The last debt sale saw lackluster demand and there’s no reason to think investors are going to suddenly be starving for US bonds. That could mean another bad day for the bond market and another spike in yields.

According to Reuters, ING Bank predicts the US Treasury will issue another $4 trillion in debt this year. That compares with $3.6 trillion in 2020. The Fed’s monthly purchases currently total $120 billion.

The math doesn’t add up, as a John Hancock analyst told Reuters.

As we do more stimulus, we will issue more US Treasuries, so if the Fed doesn’t increase quantitative easing they are in essence tapering.”

The Fed can’t taper. It can’t let interest rates spike. And words won’t be enough to hold interest rates down. The Fed is going to have to take action and that means more bond-buying.