Oil Soars Above $69 After Goldman Hikes Price Target To $80

Even as the rest of the market continues to submerge with the now traditional rug-pull at the open which sent Nasdaq tumbling after a modestly green open as Kathy Wood is apparently hell bent on liquidating all of her most liquid „growth“ names to triple and quadruple down in her biggest losers, oil is surging on the back of yesterday’s latest OPEC+ surprise which has set the stage for a $100 barrel of oil as well as a Goldman oil price target upgrade.

For those who missed the discussion (available to pro subs), late on Thursday Goldman’s Damien Courvalin wrote that „OPEC+  surprised once again by deciding to keep its production quotas unchanged for April, against our and consensus expectations for a  1.5mb/d hike (with only another small increase for Russia and Kazakhstan). In particular, Saudi Arabia will extend its unilateral 1 mb/d cut for one more month,guiding for an only gradual ramp-up afterwards.“

He adds that his key takeaway from the press conference is that „the discipline of shale producers is likely behind this slower increase in production“ and this is consistent with Goldman’s own view that shale, Iran and non-OPEC supplies are likely to remain highly inelastic to prices until 2H21, allowing OPEC+ to quickly rebalance the oil market.

As a result, Goldman is lowering its OPEC+ production forecast by 0.9 mb/d over the next six months… which as demand rises of course means that prices will go up sharply. More on that in a minute.

Couralin then explains that OPEC’s supply strategy is working „because of its unexpectedness and suddenness.“

Today’s surprise follows Saudi’s January unexpected cut, with both working in Saudi’s favor – since January 5, oil prices are up 25% and excess inventories down 56% with Saudi’s production down only 9% and with the US oil rig count up only 20% and still 33% below the level needed to stabilize output (without DUCs).

This stands in sharp contrast to the Saudi strategy prior to 2020, when OPEC viewed itself as the central bank of the oil market, reassuring too much with predictable but never large enough cuts. According to Goldman, key will be the potential shale supply response, although the latest earnings season suggests investors are still a long ways away from rewarding growth, with the few producers who hinted at higher capex underperforming the rally in oil equity share prices. 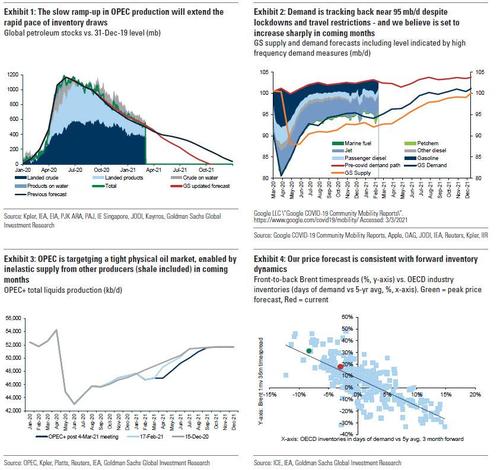 So what does all this mean for price?

According to Goldman – which was already quite bullish on oil prices ahead of the OPEC+ summit (see „This Is The Best Inflation Hedge“: Goldman Doubles Down On Commodity Supercycle“) the bank says that it is now clear that OPEC+ is in fact pursuing a tight oil market strategy, with Goldman’s updated supply-demand balance pointing to OECD falling to their lowest level since 2014 by the end of this year.

Given the bank’s revised demand forecasts remain unchanged and above consensus, OPEC’s decision led Goldman to raise its Brent forecast by $5/bbl, to $75/bbl in 2Q and $80/bbl in 3Q21: „This increase in our price forecast reflects stronger timespreads, with our updated inventory path consistent with $5/bbl additional backwardation over the next six months relative to our prior forecast.“ 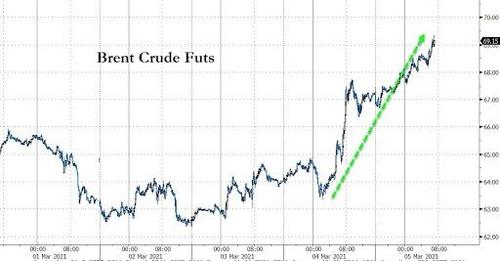 … which while great news for the like of XOM whose price rose above $60 for the first time in over a year, is also very bad news for those who still use cars instead of Uber to get from point A to point B.