When it comes to official documents, China’s five-year plans (FYPs) are the mother of them all. Not only do FYPs encapsulate all major socioeconomic goals and priorities, they contain the basic assessment and strategy of how China aims to develop. 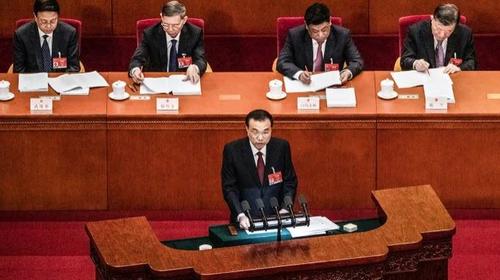 Premier Li Keqiang touted the achievements of the previous year as China overcame the coronavirus pandemic, and laid out ambitions to solidify the economic recovery, cut emissions, invest in innovation and improve a worsening demographic outlook.

„Doing so will enable us to achieve higher-quality development that is more efficient, equitable, sustainable and secure.“

The five-year plan is part of Xi’s ambition to make China a high-income economy by 2025, paving the way to doubling the country’s gross domestic product in 2035 from the 2020 base.

After the painful contraction (and immediate rebound) that China’s economy saw last year. China grew by 2.3% last year, its weakest in 44 years, but was still the only major economy to expand as it largely vanquished the domestic spread of the novel coronavirus that first emerged in the country in late 2019. 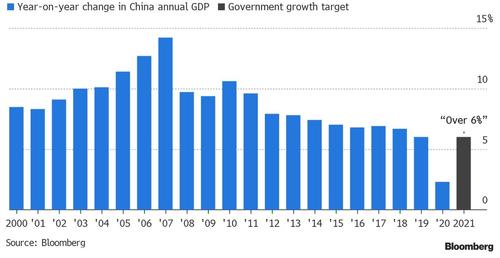 Li set a growth target of more than 6% this year for the world’s second-largest economy, seen to be easily achievable, defying expectations that China would refrain from setting a goal given global uncertainty caused by the pandemic. The growth target for the year is lower than the 8%-to-9% projected by some economists but Li argued that it is „well-aligned with the annual goals of subsequent years“ under the five-year plan to „sustain healthy economic growth.“ 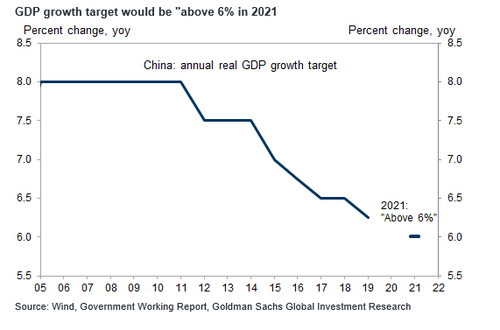 “This implies that more resources will be allocated to push forward long-term initiatives such as environment protection, fiscal consolidation and leverage reduction, so as to boost China’s long-term growth potential,” he said in a note. 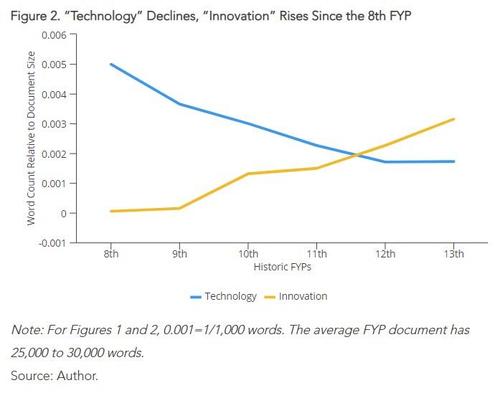 „The development of 5G networks and 1000M fiber optic networks will be stepped up and their application will be extended to more settings,“ he said.

The five-year plan also aims to increase R&D spending by at least 7 per cent each year through 2025, to reduce China’s reliance on US companies for semiconductors and other technologies.

Despite advocating „fiscal frugality,“ one exception is military spending, which will grow by 6.8% to 1.355 trillion yuan. It is slightly higher than 2020’s 6.6%, reflecting the government’s priority of modernizing its military.

Ni Lexiong, a military analyst, said that deteriorating ties with the US had created “drastic changes” in China’s external security concerns, making it impossible to cut military expenditure.

In the absence of COVID-19 stimulus, businesses, especially small and medium enterprises will continue to enjoy tax holiday and tax cuts.

Additionally, much to the chagrin of the world’s climate-change evangelists, China – the world’s largest „polluter“ – confirmed little other than that a plan to reach peak emissions by 2030 would be completed this year (and net-zero emissions by 2060).

“We will expedite the transition of China’s growth model to one of green development, and promote both high-quality economic growth and high-standard environmental protection,” Li said.

As The FT reports, the plan sent an “indecisive signal. We were hoping for more answers on climate issues, but what we got are more questions.”

China also refrained from introducing a ban on building new coal-fired plants, and did not set a target for curbing coal power plants’ capacity for the next five years.

On foreign policy, Li said the government is hopeful of a „mutually beneficial China-U. S. business relations,“ and reiterated an earlier proposal to join the Comprehensive and Progress Agreement for Trans-Pacific Partnership. 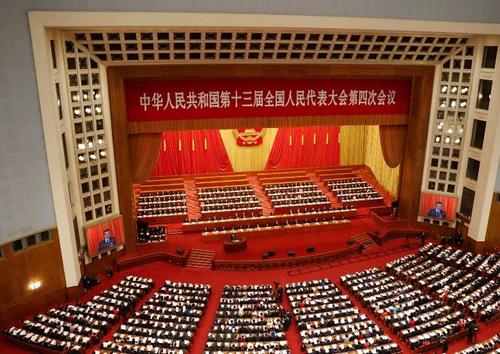 Finally, China moved to overhaul Hong Kong’s electoral system on Friday in a further blow to democracy in the city. As The FT reports, delegates will pass a contentious election law designed to reduce further the representation of Hong Kong democracy activists in the territory’s pro-Beijing legislature and other local bodies. Wang Chen, an NPC vice-chairman, said on Friday that Hong Kong’s electoral system had “loopholes and deficiencies” that could allow “anti-China forces” to seize control in the city.