Authored by John Davies and Steve Englander via Standard Chartered,

The key event for the market this week would usually be the US non-farm payroll report but focus is instead centred on Fed Chair Powell’s speech on 4 March. We doubt that he will signal near-term Fed policy action in response to the recent UST yield volatility. Given current yield levels and financial conditions, it is difficult to justify such a move without appearing to be driven solely by market developments. However, we see scope for Powell to flag potential for a Fed policy response if it starts to consider rising long-term yields a threat to the recovery. He is unlikely to mention options such as extending the duration of UST purchases or an Operation Twist, but we suspect this is the route the Fed would take, if action were needed.

In his 23-24 February congressional testimony, Powell gave no sign that he was worried about the rise in long-term UST yields. This was consistent with comments from other FOMC members. We suspect, however, that the price action on 25 February, when 10Y spiked to 1.60%, did cause concern. Fed Governor Brainard remarked on 2 March that “some of those moves last week and the speed of the moves caught my eye“. Moreover, she stated that she would be concerned if she saw “disorderly conditions or persistent tightening in financial conditions that could slow progress” toward the Fed’s full employment and 2% average inflation goals.

In terms of UST yields, we think Powell’s speech should support the calmer price action seen so far this week, as the market will likely conclude that 1.50-1.60% for the 10Y is, near-term at least, the top of the Fed’s comfort zone. Simply repeating the Fed’s current forward guidance and its view that near-term inflation will be transitory, however, runs the risk of allowing renewed yield upside (Figure 1). 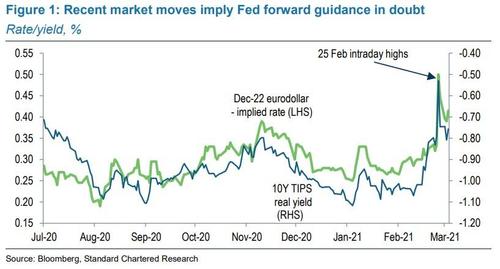 Until mid-February, the rise in UST yields and steepening of the curve since Q3-2020 was in keeping with the broader reflation trade across asset classes, and implied USD rates vol was extremely well behaved. The move in the 10Y UST yield from 0.5% last August to 1.20% was almost 100% explained by the rebuild in the breakeven inflation spread. The last fortnight, however, has seen the real yield component become the key driver of the 10Y UST yield and USD rates vol rose to its highest since the peak of the pandemic-related panic nearly a year ago (Figure 2). 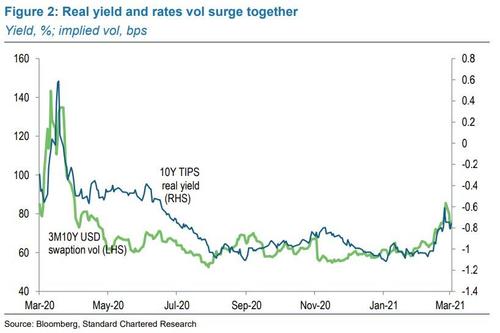 Our interpretation of the move is that the UST market hit the limit of the reflation trade before expectations for growth and inflation strengthened sufficiently for investors to question how far the Fed’s dovish forward guidance would hold. In other words, the market started to price in an outlook buoyant enough to force the Fed to taper, and eventually to hike, earlier than its forward guidance suggests. Hence, the real yield, previously anchored by the Fed UST purchases, near-zero policy rate and forward guidance thereon, suddenly surged. At its intraday high on 25 February, it had risen by 50bps in the space of two weeks.

If Powell does change his tone in a similar fashion to Brainard, we doubt that he would dissect the recent price action from a real yield perspective as we have, for fear of implying that the Fed has an implicit real yield target. However, he could say that the Fed is closely watching inflation expectations as an early warning signal that higher long-end yields might threaten the recovery and progress toward the Fed’s 2% average inflation target (AIT). Having reached 2.25% in mid-February, at the height of the volatility last week, 10Y breakevens fell as low as 2.05% and the 5Y/10Y breakeven curve is now its most inverted ever. Hence, Powell could reasonably say that, while longer-term inflation expectations are still broadly anchored, the Fed would be concerned if they fell any further.

The short end of the yield curve has been suffering from excess liquidity and undesired downward yield pressures, while the long end has experienced undesired abrupt upward moves. It is tempting to see an Operation Twist or weighted-average maturity extension as solving both problems, but there is a major difficulty. Back in 2011, the FOMC move to Twist solved a monetary policy problem. Asset markets had sold off significantly in the aftermath of the debt ceiling crisis and financial conditions indices (FCI) had visibly tightened (Figure 3). 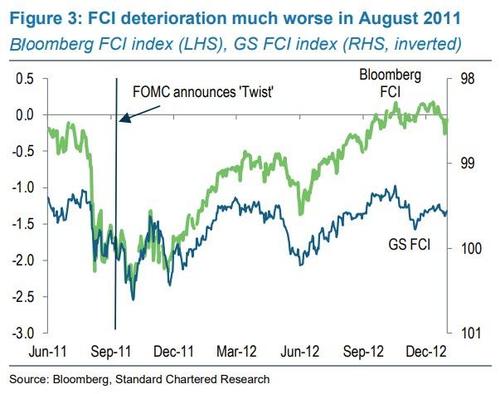 5Y5Y inflation breakevens had come off more than 70bps between end-July and early September.

In contrast, financial conditions have barely budged in recent weeks from extremely accommodative levels and the move in breakevens has been much more modest (Figure 4). 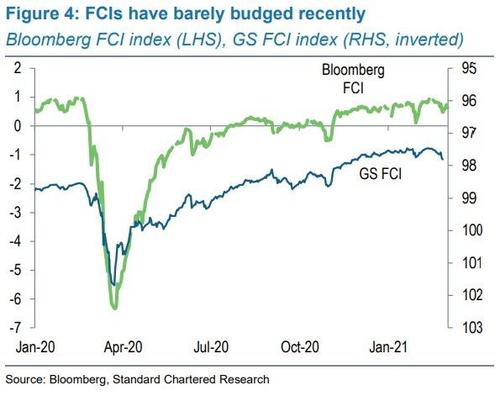 We could see a renewed Operation Twist if economic and financial market conditions deteriorated, but the evidence for such deterioration is scant. As traumatic as recent weeks have been for fixed income investors and as much as the Fed would welcome higher short-term and lower long-term yields, the current yield curve issues do not look like monetary policy issues. Hence, we expect a warning of policy moves on further deterioration rather than immediate action.