Thousands Of Quakes Rock Iceland As Volcanic Eruption Could Be Brewing

Over the past week, there have been swarms of earthquakes on the Reyjanes Peninsula in Iceland. Most of the quakes are felt around Keilir volcano, just 20 miles south of the capital. Officials are warning similar quake activity has previously preceded volcanic eruptions.

According to the Icelandic Meteorological Office, thousands of quakes have hit the southwestern region of Reykjanes over the past week. The largest earthquake, a magnitude 5.6 on the Richter scale, occurred on Feb. 24 that rattled the nearby capital city of Reykjavík. 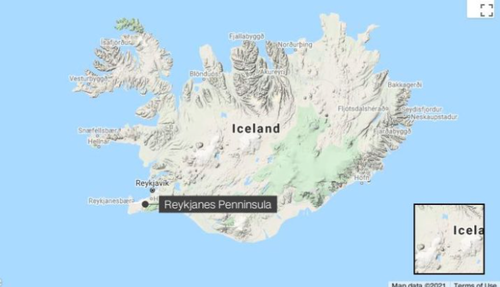 The abundance of quakes have yet to cause any damage, but authorities aren’t taking any risks and have issued aviation alerts for flights inbound and outbound flights at Reykjavik Airport and told people to stay away from the volcano.

„The earthquakes happening on the peninsula near Keilir aren’t the only sign of potential activity. Mapping of the land surface using radar shows a lot of deformation — more than can be explained by earthquakes alone. The Icelandic Meteorological Office (the nation’s volcano monitoring agency) interprets this as magmatic intruding near the surface under the area,“ said Discover Magazine.

„I have experienced earthquakes before, but never so many in a row,“ Reykjavik resident Auður Alfa Ólafsdóttir told CNN. „It is very unusual to feel the Earth shake 24 hours a day for a whole week. It makes you feel very small and powerless against nature.“

The last major incident was the Eyjafjallajökull eruption in 2010, which caused a massive shutdown of the world’s airline industry as ash plumes circulated in the atmosphere. If another eruption is seen this could be disastrous for the industry as it attempts to recover from the pandemic downturn.

For now, the rumbles underneath Iceland continue, one can only watch and wait as an eruption may be imminent.

Here’s a live stream of the Keilir volcano: