After an inconclusive OPEC+ JMMC session yesterday failed to reach any definitive agreement on oil output, moments ago the closely watched OPEC+ meeting started (watch the webcast here), and oil sprint out of the gate following comments from the Saudi Energy Minister who said the oil market has improved but the uncertainty surrounding the recovery has not receded, and urged „supply caution and vigilance in the oil market“ and told members that “the right course of action now is to keep our powder dry, and to have contingencies in reserve to insure against any unforeseen outcomes.“

“The right course of action now is to keep our powder dry, and to have contingencies in reserve to insure against any unforeseen outcomes,” prince Abdulaziz added #OOTT

A similar cautious stance was echoed by Russian Deputy PM Novak, who said the oil market has not fully recovered yet but we are in a much better shape, COVID remains an uncertainty, we have to stick to agreements. While this comment added to the oil boost, according to oil market watcher and Energy Intel reporter, the comment was „code for the market can take more supply.“ As a reminder, there has been a long-running tension between Russia and Saudi Arabia on easing production, the former seeking more output even as Riyadh seeks higher prices.

Novak stresses the importance of conformity to the pact #OOTT #opec 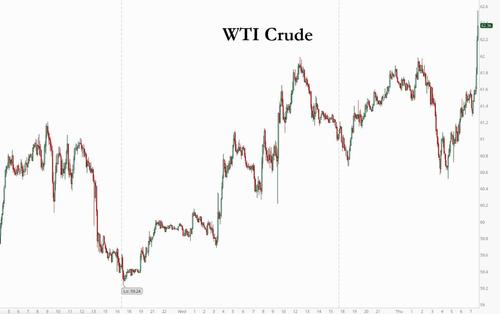 For those looking to catch up on the latest OPEC+ thoughts and actions, the following primer from Newsquawk should come in handy:

OPEC+ options include a rollover of current cuts – several members support the idea of no curb easing in April, according to sources