A risk-off day started in Asia following a top Chinese banking regulator’s comment that he’s “very worried” about global financial bubbles, and it carried into the U.S. trading session.

But it’s debatable whether the comments from Guo Shuqing, chairman of the China Banking Regulatory Commission, are directly responsible for the 1.7% selloff in the Nasdaq Composite. After all, volatility should be expected after a shocking 22bp surge in five-year Treasury yields on Thursday.

In fact, the bubble comment from Guo, who is also the party secretary of the PBOC, isn’t even new. He has sounded the alarm about irrational exuberance in global markets before. In October, for instance, he blamed policies in advanced nations for the disconnect between the financial markets and the economy.

And whether there’s an asset bubble is also open for debate. Sure, there are pockets of excess, including the eye-popping price surge of newly listed stocks, as the Bank for International Settlements noted in its quarterly review. But even the BIS conceded that, while equity valuation is high by historical standards, it doesn’t “appear excessive” when taking into consideration low interest rates.

For example, Robert Shiller’s “Excess CAPE Yield,” which compares the long-term inflation-adjusted earnings yield to real bond yields, is at about the average of the past decade and is twice as high as it was in late 2018. The indicator does a pretty good job of predicting future excess stock returns over bonds. 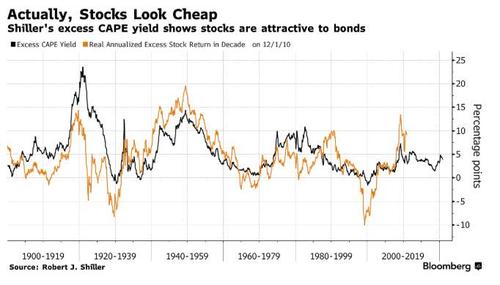 Needless to say, using a potentially overvalued asset to justify the valuation of another asset doesn’t sound particularly convincing. When interest rates normalize, there’s no doubt there will be pain. The market got a taste of that just last week.

But as the Fed’s Lael Brainard reminded us Tuesday, it will take “some time” for the central bank to pull back its stimulus. So the day of reckoning may be delayed until further notice.

What Chinese policy makers do worry about is the spillover from the easy monetary policy abroad that may push speculative capital ashore just as it opens its markets wider. The surge of foreign flows have increased their influence in the domestic market, leaving it more vulnerable to the ebbs and flows of international sentiment. 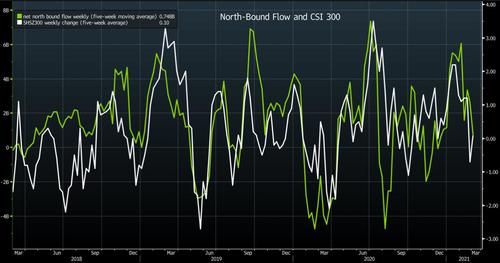 For instance, there’s a positive correlation between the stock inflows via the northbound stock connect and the CSI 300 index.

To that end, Guo’s worry about the policy divergence between China and the rest of the world is justified.