„This Is Unsustainable“: 2021 SPAC Issuance Will Surpass Entire 2020 Total Before End Of March

The last time we addressed the staggering SPAC bubble sweeping across US capital markets – and when we gave Matt Taibbi the mic to express his SPAC views in his uniquely trademark style –  was about ten days ago when citing Goldman data, we reported that we have reached a surreal, permanently high plateau where 5 new SPACs price ever single day so far in 2021, and that YTD, 144 SPACs have gone public raising a total of $44 billion.

Well in the 10 days since, it’s only gotten even more surreal with Goldman’s chief equity strategist David Kostin writing that SPAC issuance has exploded (even more) and a whopping 175 SPACs have raised $56 billion in IPO capital YTD, an average of $1.5 billion per trading day. As Kostin further notes, in February alone, 90 SPACs raised $32 billion in IPO capital the largest issuance month on record.

Remarkably, as even Kostin admits, „the blistering pace of issuance is likely unsustainable“ however – just in case it is – he calculates that if the current pace of issuance persists, 2021 will surpass the 2020 full-year total before the end of March! 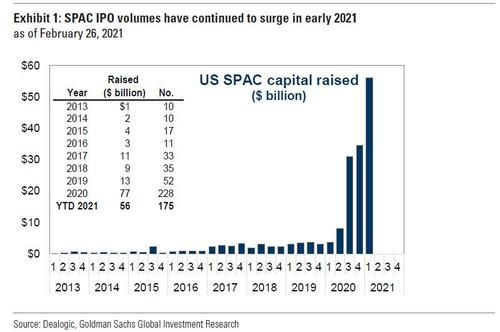 Finally, not even Kostin can sustain himself in describing the SPAC boom by the three words that seem most appropriate…

Finally, Goldman listed 20 active SPACs that trade at premiums of 17% to 47% above their IPO prices. 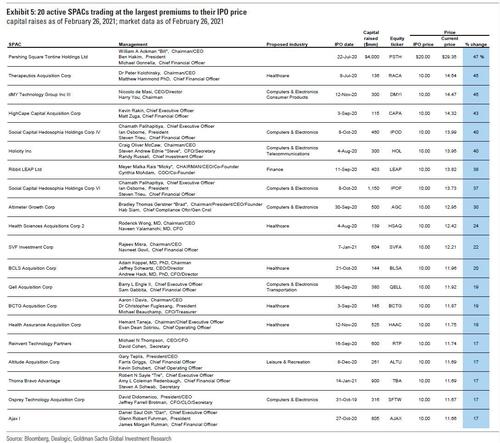