Manhattan’s luxury condo frenzy petered out a few years ago. Owners are taking realized losses as they offload properties at steep losses.

A prime example of this is the pending deal at 551 W. 21st St., where two units listed for a combined $26 million found a buyer after a couple of years on and off the market, according to Bloomberg, who cited data from brokerage Olshan Realty. The owner initially acquired the property in 2016 for $31.3 million and then attempted to flip it for $40 million the following year.

With no success, the owner is expected to realize a 17% loss on the properties once the transaction is completed.

Manhattan’s luxury condo market peaked a few years ago and has since developed into a nightmare for sellers. Massive supply is quickly eroding values as inventory builds. In early 2020, half of all new luxury condo units constructed after 2015 in the borough were unsold. A confluence of macroeconomic headwinds, as well as SALT deduction caps and transfer taxes, cooled the market. Then came the big bad pandemic that wreaked even more havoc in the borough.

Donna Olshan, president of the brokerage, said sellers in the market have no interest in sticking around in „New York if they’re not using the asset or if the asset isn’t giving a return.“

Olshan said a deal at 80 Columbus Circle for a 74th-story condo recently listed at $25 million. The seller combined two apartments in the tower, one unit purchased in 2011 for $17.5 million, and the other unit (next door) purchased in 2014 for $18 million. 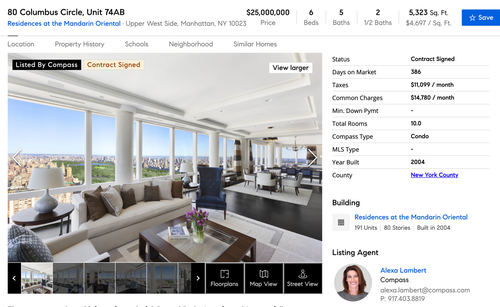 There is some good news in the luxury real estate market – after writing about the downturn for 18 months and the plunge following the pandemic, the decline in prices has brought buyers to the table.

With Mayor Bill De Blasio doing everything he possibly can to drive both businesses (like Goldman Sachs) and individual citizens out of the city, the effects of his colossal mismanagement and general cluelessness have come at a loss for some wealthy elites who bought luxury condos in the last several years, thinking they could flip the unit(s) for a quick buck. Many have transformed into bagholders, or recently, they want out and are willing to take realized losses.