Incoming SEC Chair Gary Gensler has said at the U.S. Senate confirmation hearing for the nominees to lead the Securities and Exchange Commission and the Consumer Financial Protection Bureau that he’s going to be examining the payment for order flow business model closely.

He committed to looking at the business model that has been at the center of the GameStop controversy for the past several weeks, according to Bloomberg on Tuesday. Critics of the system (including Zero Hedge) have pointed to how frontrunning could be prevalent as a result of the model. This ostensibly could result in clients of zero commission brokerages not getting the best possible execution on trades.

Gensler also said he’s going to scrutinize trading apps that encourage „gamification“ of trading, according to Yahoo. He is specifically looking at “how to protect investors using trading applications with behavioral prompts designed to incentivize traders to trade more.”

Gensler also said he will try to rid cryptocurrency markets of fraud and manipulation, in what would likely be a herculean undertaking for his administration. 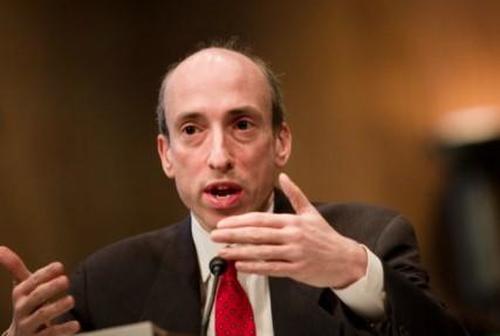 Meanwhile, according to Bloomberg, CFPB nominee Rohit Chopra said he „backs the U.S. making its own real-time payment system to give consumers faster access to and better control over their own dollars.“

Gensler is reported to be worth up to $119 million, as we noted last month.  Gensler was previously the chairman of the CFTC and a partner at Goldman Sachs. He disclosed his net worth as part of disclosures he had to file with the Office of Government Ethics last month. A majority of his money was made at Goldman, where he joined in the late 1970’s after graduating from the University of Pennsylvania. He became one of the youngest partners in Goldman Sachs history.

Recall, we wrote about Gensler’s nomination in mid-January.

His arrival will likely be a stark difference from the last 4 years of Jay Clayton, as Gensler’s resume includes going to war with major financial titans when he was head of the Commodity Futures Trading Commission – and winning. Financial lobbyists sometimes simply called him „the enemy“ during the 2010 Dodd-Frank Act battle.

Justin Slaughter, a consultant at Mercury Strategies, said: “The sheriff is coming to the preeminent financial regulator in the world. It means regulation and enforcement are about to get much tougher.”