Joe Biden is giving so much money to states as part of the $1.9 trillion stimulus package that they’re set to receive approximately six times more money than estimated tax revenue shortfalls across the country, according to Bloomberg.

While the package carves out nearly $200 billion for state governments, the cumulative tax revenues which have disappeared in the current fiscal year are just $31 billion. „In other words, that money could make up for that loss and be plowed back into states’ economies, such as their own version of relief checks, infrastructure projects and more, depending on the federal guidelines around the aid.“ 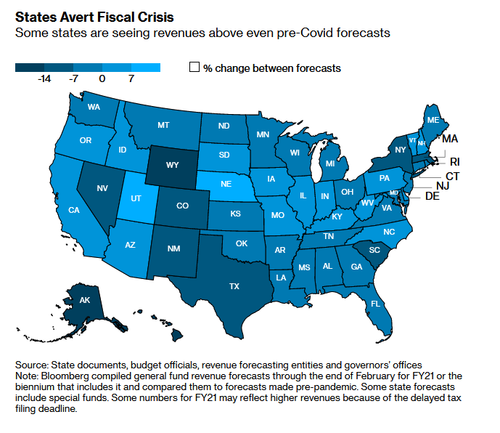 In short – states, assuming they don’t squander the funds (who are we kidding?), could play a pivotal role in accelerating the recovery – assuming the money actually stimulates jobs and/or ends up in the hands of consumers. The funds would also allow for the unwinding of various budgetary cuts which began last March, and are responsible for the elimination of more than 1.3 million state and local government jobs – which Bloomberg notes is „nearly twice as many as were lost after the last recession.“

Republicans, however, argue that some of the stimulus should be cut or shifted to other priorities which could have a more immediate impact than essentially giving states their own giant slush funds.

„If the whole point of this bill is to stimulate economic activity, the federal government has ways of doing that, that may be more efficient than sending checks to state and local governments,“ said Moody’s director of public sector research, which estimates that $56 billion is the actual price tag states need to cover shortfalls through 2022 after previously allocated aid is taken into account.

Bloomberg also notes that „the financial impact overall has been far smaller than initially feared when Covid last year sent the US economy into the deepest recession since World War II, which left governors nationwide braving for the gravest fiscal crisis of modern times.“

Deficits on that scale were averted after the federal government pushed through stimulus plans in March and again late last year, driving stocks to record highs and promising to increase collections of capital gains taxes. The magnitude of the shortfalls also reflects the unusually uneven nature of the recession: While lower paid service industry employees were thrown out of work, the highest earners who pay far more in state taxes were less affected because they were able to work from home.

The result has been in some cases dramatic. California, a state that’s heavily dependent on income-tax revenue from the highest earners, is seeing revenue collections run about 10% more than was anticipated in the budget for the fiscal year that will end in June. In Oregon, the pandemic-era revenue losses “pale in comparison” with those of previous recessions, forecasters wrote in a Feb. 24 dated report. -Bloomberg

There are notable exceptions, however – such as tourism-dependent Hawaii, which has seen revenues evaporate. The state’s revenue forecast has dropped around 19% from pre-pandemic expectations for fiscal 2021 according to Bloomberg. In New York, revenues are projected to be 11.7% below pre-pandemic forecasts.

That said, tax revenues are just one way to gauge the impact of the pandemic, and doesn’t account for increased cost. The toll may also be understated due to shifted tax deadlines, inflating revenue collections in various states. Moreover, $50 billion has been borrowed from the federal government so states can cover a deluge of jobless claims, while cities and counties have been begging for aid throughout the pandemic.

In total, the stimulus will allocate $350 billion to states and local governments struggling to operate amid sharply lowered tax forecasts.

Republicans, particularly former President Donald Trump, have repeatedly called the carve-outs a „bailout“ for poorly run Democratic strongholds. Even Mitt Romney (R-INO) called Biden’s plan „wasteful and harmful,“ while moderate Democrats in the Senate are looking at potential cuts to state and local aid as they attempt to streamline the package.

JPMorgan CEO Jamie Dimon says the government „should be cautious about overdoing it,“ adding „Get us through the problem, get the country growing, but try not to overdo it too much.“