“Most businesses remain optimistic regarding the next six to 12 months as Covid-19 vaccines become more widely distributed.,” according to the Beige Book based on information collected by the Fed’s 12 regional banks through Feb. 22.

However, price anxiety is starting to leak into the bland report.

In January, The Fed’s Beige Book reported that:

Almost all Districts saw modest price increases since the last report, with growth in input prices continuing to outpace that of finished goods and services.

A month later and, as milquetoast as the Beige Book always is, it would appear things have escalated:

Specifically, The Fed noted that In many Districts, the rise in costs was widely attributed to supply chain disruptions and to strong overall demand. Transportation costs continued to increase, in part due to rising fuel costs and capacity constraints. Reports on pricing power were mixed, with some retailers and manufacturers affected by input cost increases reporting the ability to pass prices through, while many others were unable to raise prices. Several Districts reported anticipating modest price increases over the next several months.

Altogether, there were 166 mentions of „prices“ (up from 144 in January), which fits with the surge in ISM survey prices… 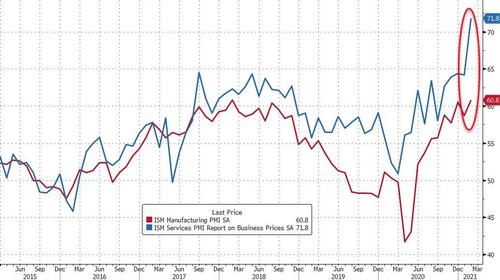 Perhaps even more notably, there were 21 mentions of „disruptions“ in February (compared to 9 in January)

Despite challenges from supply chain disruptions, overall manufacturing activity for most Districts increased moderately from the previous report

The February Beige Book had 101 mentions of the word „moderate“ (slightly up from 99 in Jan) but „moderate“ – which is an ‚escalation‘ from „modest“ – was used 73 times in Feb, considerably more than the 54 times in January.

Instances of „slow“ have been falling for four straight months, and virus-related words appeared to drop in Feb after peaking in Jan. 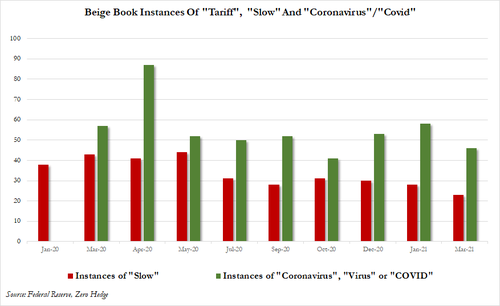