The housing boom unleashed by the Federal Reserve during the pandemic was built on historically low mortgage rates (thanks Powell), low inventory, city-dwellers moving to rural areas, and remote-work phenomenon. In all, housing prices in 20 U.S. cities surged in December at the fastest pace since 2014 as mortgage rates fell to record lows. But a new rate regime is in town, one where bond traders are pricing in inflation as they believe the vaccine rollout and stimulus will lead to a sizzling economic recovery, one that could force the Fed to hike rates earlier (and more aggressively) than expected…

…all of which has resulted in the latest treasury and mortgage bond rout.

If you called up your mortgage lender last week for a 30-year fixed loan, the rate was around 2.81% – this week, the rate jumped to 3.06% on Friday, the highest since August. Rates have been increasing since hitting a record low of 2.65% in early January. 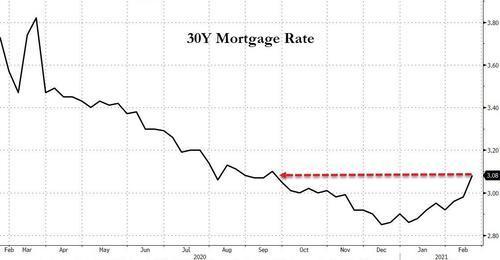 Lewis Sogge, a senior loan officer at Freedom Mortgage, said the sudden jump in mortgage rates caught him „off-guard.“ He anticipated the 30-year fixed loan rate to hover at January levels (2.65%) through the first half of 2021.

Since that’s not the case anymore, Sogge said his refinancing pipeline is already „drying up.“ He warned the longer the 30-year fixed loan rate hovered above 3% – there was potential for more „upside in rates.“

Greg McBride, the chief financial analyst at Bankrate.com, said a rising rate environment could „downshift“ the market from „red hot to merely sizzling.“ He points out inventory remains how.

Rising rates are bad news for lenders who have been making hand over fist during the pandemic in a low rate environment. The latest mortgage applications collapsed to a nine-month low last week while pending home sales slumped to six-month lows. 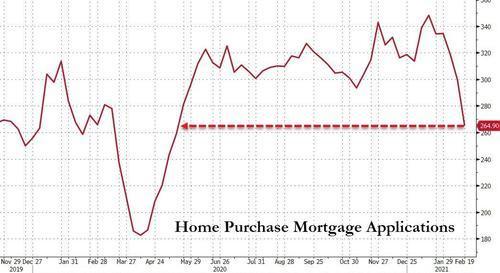 „When combined with demand-fueled rising home prices and low inventory, these rising rates limit how competitive a potential homebuyer can be and how much house they can purchase,“ Sam Khater, chief economist at Freddie Mac, said in a statement.

The route in treasury and mortgage-backed bonds (MBS) has become more pronounced this week. Bloomberg explains:

„…Treasury yields — which strongly influence home-loan rates — suddenly rise sharply, many Americans lose interest in refinancing their old mortgages. A reduced stream of refinancings means mortgage-bond investors are left waiting for longer to collect payments on their investments. The longer the wait, the more financial pain they feel as they watch market rates climb higher without being able to take advantage of them.“

A rising rate environment means investors who hold MBS must reduce the risk of loans on their books to counter the damaging effects of slower loan prepayments, also known as „convexity hedging.“

The spread for Fannie Mae’s 30-year current-coupon spread to the 5/10-year has blown out in the last couple of weeks – now around .8635 as the UST10Y surges above 1.50%. The reason for the blowout is that higher uncertainty surrounds the housing market when rates rise.

The Fed’s bubble-blowing in residential real estate during the pandemic was to create a wealth effect to offset the devastating blow the pandemic caused to the economy. In the process, these monetary magicians created soaring wealth inequality and housing affordability issues.

So in the meantime, inflation fears and Fed bluff-calling send sovereign rates higher, which in turn drives convexity hedging forcing mortgage rates to rise, jeopardizing the housing recovery (amid a collapse in affordability).