„U.S. Excess Savings Will Be A Massive Economic Boost From 2Q“

U.S. personal incomes soared in January as Americans received another batch of pandemic-relief checks, resulting in a spike of total excess personal savings.

According to the Commerce Department report, incomes increased by 10% MoM, the largest gain in nine months. The January jump came after the $900 billion pandemic aid package passed in December. As a reminder, the bill included $600 stimulus checks per American, including adults and children. However, the size of the payment decreased for people who earned more than $75,000 in the 2019 tax year. The check disappeared altogether for those who earned more than $99,000. In addition, the legislation supplemented jobless benefits with an extra $300 a week payment.

Meanwhile, purchases increased 2.4% MoM, pushing personal saving rate up to 20.5%, the highest since May 2020. In this context, U.S. personal savings as a share of nominal GDP will rise again in 1Q21, after reaching a post-war high at the end of 2020 on a 4-quarter moving average basis. 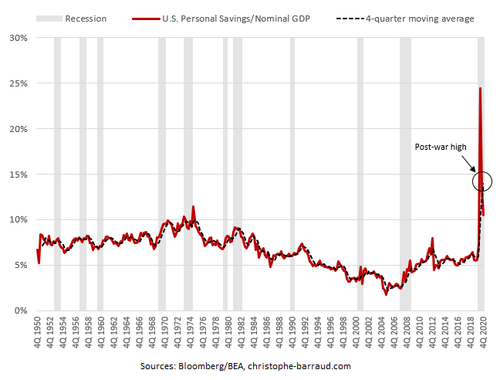 In the meantime, the level of total excess personal savings accumulated since the beginning of the Covid-19 crisis (March 2020) kept skyrocketing. According to my estimates, it reached $1.681 trillion in January (7.8% of nominal GDP). 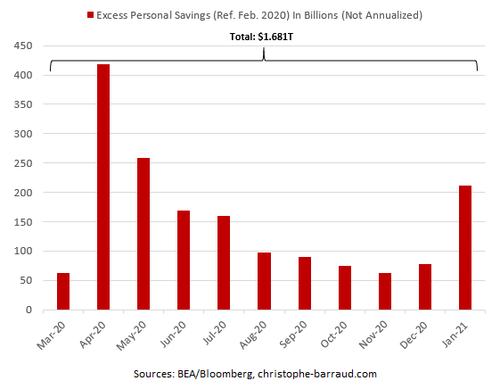 This huge amount will grow again in the coming months and could even top the $2 trillion mark (9.3% of nominal GDP) as soon as March (if the next Federal stimulus is disbursed in time, otherwise it will be in April). The fact is that, this week, California legislators approved a $7.6-billion COVID-19 package, including $600 stimulus checks. An estimated 5.7 million checks will go to low-income Californians, including families with children enrolled in CalWORKS, as well as elderly, blind and disabled recipients of Supplemental Security Income or the state’s Cash Assistance Program for Immigrants.

Lastly, another federal stimulus is likely to be passed before March 14, when key programs buoying millions of jobless Americans expire. Among other details, the plan contains:

In my opinion, a part of this total excess personal savings will probably flood the economy from 2Q21 as economic confidence returns. As I already noted, the health situation has improved significantly since mid-January. Moreover, latest data and the recent approval of Johnson & Johnson’s vaccine suggests that the U.S. will be able to vaccinate all of its over-65s and health workers by the end of May (at the latest). Therefore, it is very likely that most of states will ease restrictions supporting economic activity and labour market confidence. Note that hiring intentions of companies in the most affected sectors have already improved.

Job postings on @indeed 5% above the pre-pandemic baseline in US, as of 2/19. Another week of solid gains.

One bright spot: job postings up in arts & entertainment, which was hit hard in the pandemic. Now just 6% below baseline.

(No blogpost this week.) pic.twitter.com/8XOt7nkpFS

To conclude, a part of total excess personal savings will probably flood the economy from 2Q21 as economic confidence returns progressively to normal. In addition, most of economists underprice the “consumer revenge” effect which reinforces my forecast that U.S. growth will exceed expectations in 2021 (recently revised upward to +4.9% according to the Bloomberg consensus).