After what DB’s Jim Reid wrote was an incredibly stable January, „February saw no such repeat as investors positioned themselves for the prospects of a much stronger-than-anticipated economic recovery over the coming months.“

The effects, as everyone can recall, were seen across multiple asset classes, with sovereign bonds selling off sharply as investors brought forward their expectations of central bank rate rises. While equities saw modest gains for the most part over the month, the rise in yields meant they fell back from their all-time highs in mid-February.

Over in commodities, those set to take advantage of the recovery performed strongly, such as oil and copper, but gold has been the worst YTD performer in DB’s sample as investors have continued to move out of the traditional safe haven and transition over into „new age“ fiat alternatives such as bitcoin which another amazing return, rising 39% in February despite a sharp dip at the end of the month.

Starting with sovereign bonds, all of the countries in DB’s sample saw their government debt lose ground for the second month in a row, as investors became much more optimistic on the prospects of an economic recovery, as well as a potential return of inflation. The changes in sentiment have come amidst better-than-expected economic data, the continued rollout of the vaccine, as well as the likelihood that the Biden administration will pass a large stimulus package in the coming weeks. In response, US Treasuries fell -2.3%, which is their worst monthly performance since November 2016, following the election of Donald Trump when investors similarly reacted to the prospect of much bigger fiscal stimulus.

Over in Europe, Italian BTPs outperformed the other government bonds, only seeing a -0.8% decline, thanks to the positive reaction to former ECB President Draghi becoming Prime Minister. Indeed, the spread of Italian 10yr yields over bunds actually fell beneath 100bps during the month, which is the first time that’s happened since early 2016.

Meanwhile, at the top of the table were commodities, with both Brent crude (+18.3%) and WTI (+17.8%) oil prices leading the sample for the second month in a row, supported by hopes for a stronger economic recovery and tight supplies. In turn, that extended their YTD leads to +27.7% and +26.8% respectively. February marked the 4th consecutive monthly gain for both, and has meant that oil prices are now at their highest level in over a year.

Copper was another which had a great month, rising +15.1% to push the price up to its highest levels in nearly a decade. One commodity that didn’t do so well was gold however, falling -6.1% over February to become the worst YTD performer in the German bank’s sample, having lost -8.7% since the start of the year. The traditional safe haven has lost ground as investor optimism has increased over the recovery, and has also been under pressure from higher yields. This meant that like US Treasuries, gold had its worst month since November.

Over in stocks, even as equities sold off towards the end of the month, most indices still managed to return small but steady gains. The S&P 500 rose +2.8% on a total returns basis, while the STOXX 600 just trails with a +2.5% increase. Banks in particular were one of the top performers with the STOXX 600 banks up +15.8%, supported by the recent rise in bond yields, while tech stocks continued to advance, with the NYSE FANG+ index gaining a further +5.4%. Another outperformer were most of the southern European indices, with Spain’s IBEX 35 (+6.0%), Italy’s FTSE MIB (+5.9%) and Greece’s Athex (+5.7%) all seeing decent gains. One country that didn’t share in this was Portugal, where the PSI All-Share Index fell -6.4% over the month, making it the worst monthly performer against the backdrop of a very large rise in coronavirus cases.

Finally in the FX sphere, the Japanese Yen is currently experiencing its worst start to the year since 2013, being down -3.0% against the US Dollar on a YTD basis. It’s the reverse picture for the British pound however, which recorded its 5th consecutive monthly gain against the US Dollar in February (+1.6%), aided by the continued success of the UK’s vaccine rollout along with the Bank of England pushing back on the prospect of negative rates in the near term.

And once again, it was bitcoin that recorded one of the strongest performance, rising another +38.8% in February to bring its YTD gains to +56.0%.

The February return of assets in DB’s sample (which sadly excludes bitcoin), is shown below… 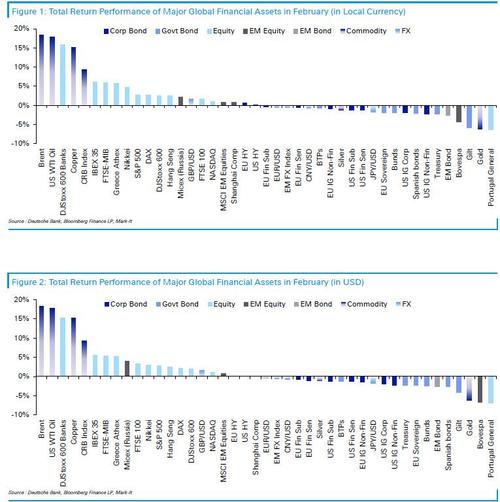 … and the YTD summary is here: 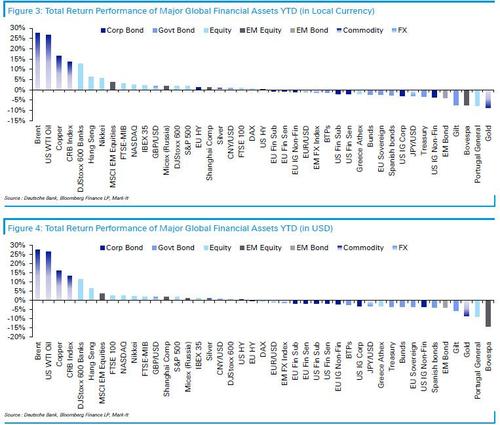