„Griddy passed skyrocketing energy costs to customers with little to no warning, resulting in consumers paying hundreds or even thousands of dollars each day for electricity,“ the statement said.

„Griddy misled Texans and signed them up for services which, in a time of crisis, resulted in individual Texans each losing thousands of dollars. As Texans struggled to survive this winter storm, Griddy made the suffering even worse as it debited outrageous amounts each day. As the first lawsuit filed by my office to confront the outrageous failure of power companies, I will hold Griddy accountable for their escalation of this winter storm disaster,“ said Paxton. „My office will not allow Texans to be deceived or exploited by unlawful behavior and deceptive business practices.“ 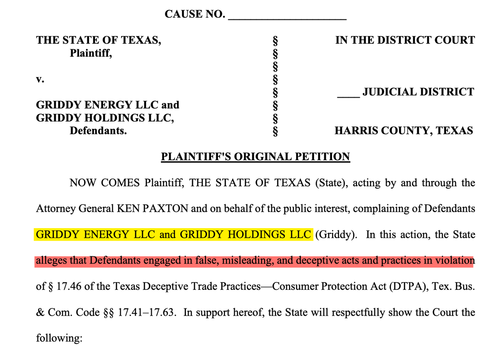 Griddy, which debuted in 2017, allowed people to opt into variable-rate electricity plans – essentially paying wholesale prices for electricity instead of a fixed rate. But when the February winter freeze and multiple storms resulted in power rates to skyorcket – some Texans were slapped with thousands of dollars in energy bills.

The lawsuit seeks relief from Griddy to ensure that „the Texans it serves will receive truthful and accurate energy service in the future, and to have the Court order refunds from available sources,“ the statement concluded.

The good news is that most Texans don’t have variable plans, according to Catherine Webking, a partner at Austin-based law firm Scott Douglass & McConnico.

Unfortunately, when energy demand is high, the wholesale price of power can be quite expensive. Certainly, scrutiny is building across multiple state governments about how some energy companies charge their customers.

One Texas resident was slapped with a multi-thousand dollar power bill. She said:

Maybe customers with variable-rate plans should get into the game of hedging? Or perhaps, for starters, at least keep an eye on power rates…