WTI has suddenly crashed from a strong overnight open up to $63, down to below $60 this morning. 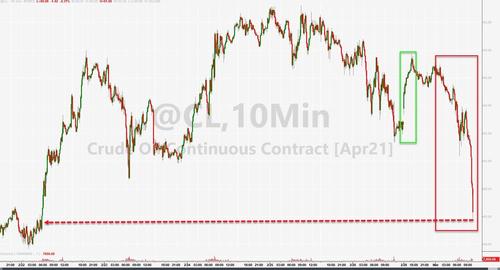 While the catalyst is unclear, a number of market participants are pointing to a story in The Financial Times that warns the Brazil-variant of the virus has been found to evade natural immunity.

The P. 1 Covid-19 variant that originated in Brazil and has spread to more than 25 countries is around twice as transmissible as some other strains and is more likely to evade the natural immunity people usually develop from prior infection, according to a new international study.

It was also “able to evade 25-61 per cent of protective immunity elicited by previous infection” with any earlier variant, the researchers found, in a sign that current vaccines could also be less effective against it.

Those headlines do not fit well with the ‚almost back to normal‘ narrative being pumped around the world, which was shaken this morning as China’s factory activity growth slipped to a nine-month low in February, sounding alarms over Chinese crude buying…

„One negative is more and more talk about Chinese oil demand maybe faltering, that they bought all the oil that they’re going to need for a while,“ said Phil Flynn, senior analyst at Price Futures Group in Chicago.

„There’s some talk that their strategic reserves are filled up, and so some people are betting against the Chinese continuing to drive oil prices.“

OPEC+ meet on Thursday and could discuss allowing as much as 1.5 million barrels per day of crude back into the market. ING analysts said OPEC+ needs to avoid surprising traders by releasing too much supply.

„There is a large amount of speculative money in oil at the moment, so they will want to avoid any action that will see (those investors) running for the exit,“ the analysts said.

The big question is, will this be enough to reverse the momentum as we warned yesterday that CTAs had gone „all-in“ on oil…

Get ready for the next round of lockdowns and the next leg down in demand expectations.