After Record January Surge, US Spending Plummets In February… And It’s Not Just The Texas Freeze

Unlike the recent retail sales report which stunned sellside expectations with a 5-sigma blowout beat, Friday’s personal spending report came in generally as expected, even if it too came in scorching hot, with personal incomes soaring 10% M/M and a whopping 13% Y/Y thanks to the December $900BN stimulus hitting household checking accounts. 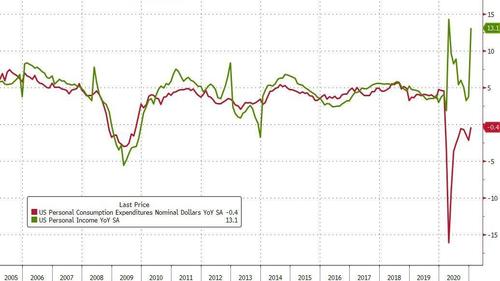 But for all those planning on extrapolating this surge in spending into February and further into Q1, you may want to hold the champagne.

According to the latest aggregated credit and debit card data from BofA, total card spending declined 2% yoy for the 7-days ending Feb 20th with Bank of America chief economist Michelle Meyer writing that „this weakening owes to the winter blizzard that created major disruptions to Texas and the surrounding region.“ BofA remains optimistic, and believes this is a temporary setback and expect a recovery as is typical with natural disasters.

Some more details on the big driver behind February’s spending plunge:

The winter blizzard: The blizzard that rampaged the South and left millions without power created major disruptions to economic activity. We found particular weakness in card spending in TX, LA, OK, MS, AR and TN. Combined card spending in these six states ran at a -25% yoy pace for the 7-days ending Feb 20th. Subtracting these states from the total, card spending increased 1.3% yoy over the same period, which was likely still held down by poor weather conditions given the breadth of the blizzard. 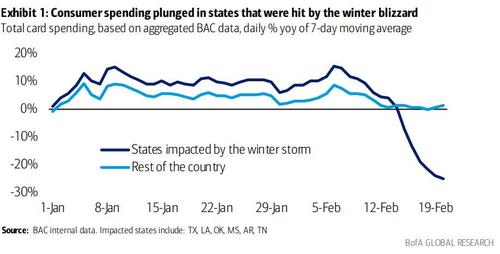 As Meyer further notes, no sector was immune to the blizzard related retrenchment in consumer spending. 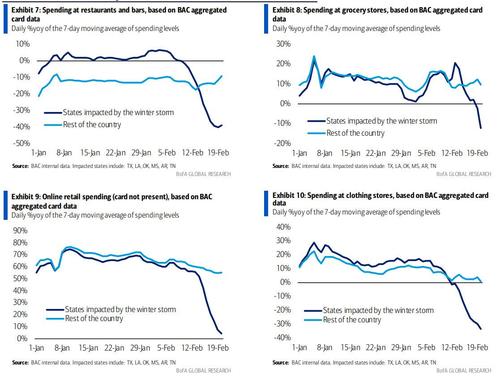 Predictably, restaurant spending plunged in the states where the blizzard hit, down 39% yoy, while the rest of the country actually saw an improvement in restaurant spending to -9.4% yoy, likely reflecting easing COVID-related restrictions with restaurant activity in California accelerating. Grocery store spending also declined in the affected states after increasing prior to the storm. 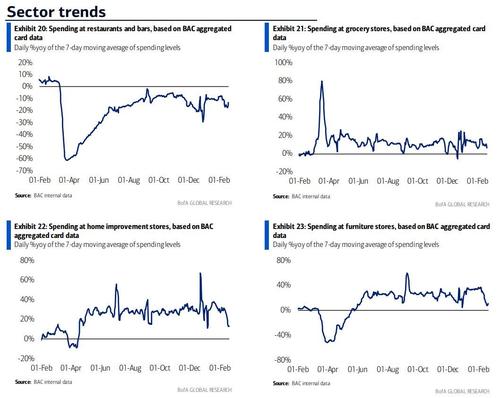 Even retail spending online (card not present) weakened meaningfully in affected states, likely reflecting the loss of power in the region. 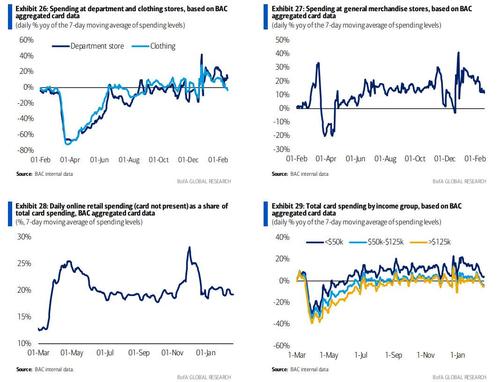 Next, BofA takes a tangent In order to understand consumer spending patterns around natural disasters, we looked at the daily data around Hurricane Irma in 2017. Florida, the epicenter of the hurricane, saw a similar sized drop in spending of around -40% yoy when the hurricane hit. Spending then normalized around 10 days after the initial rainfall from Irma. 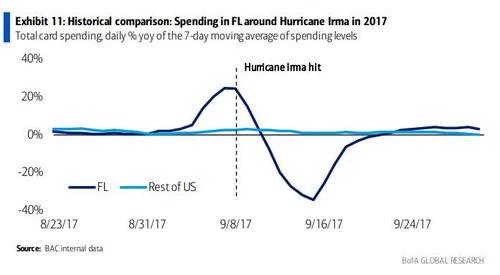 If history is a guide, BofA concludes that we are likely to see spending in TX and surrounding states return back to trend in the next week or so. We could even see spending run above trend as households restock.

That would be the optimistic view. The less optimistic view comes from similar card spending data, but this time from JPMorgan, which found a similar plunge in Texas spending but also an acute dropoff in total spending across the US, not all of which could be explained by the Texas freeze. 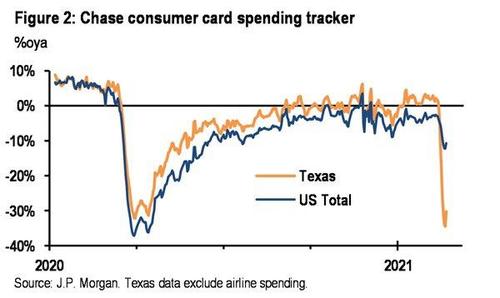 In other words, after the record January spending boom sparked by the latest round of stimulus, it is quite possible the Americans retrenched again and whether it is due to the cold weather or concerns that quite some time may pass before the next government handout stimulus is sent out, we may well be in for a rough patch as US spending – which drives 70% of US GDP – hibernates at least until such time as the first (of many) Biden stimulus is passed and those $2,000 $1,400 stimmies are sent out. Which, incidentally, would be good news for a market suddenly terrified that the US economy is overheating and something must be done to halt the surge in output and/or spending…