A Primer On Commodity ‚Supercycles‘

A surge in commodity prices has Wall Street banks gearing up for the arrival of what may be a new – an extended period during which demand drives prices well above their long-run trend. A major impetus is the massive stimulus spending by governments as they juice up their economies following pandemic lockdowns. The evidence includes surging copper and agricultural prices and oil back at pre-COVID-19 levels.

One theory is that this could be just the start of a years-long rally in appetite for raw materials across the board, but the reality is more complicated. 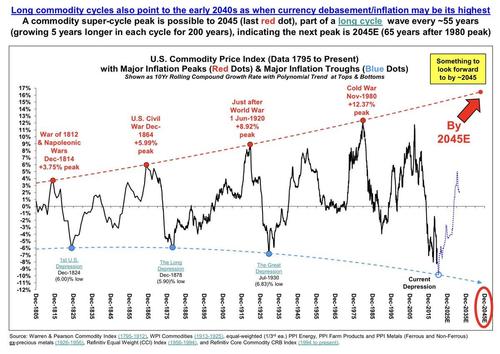 1. What is a supercycle?

A sustained spell of abnormally strong demand growth that producers struggle to match, sparking a rally in prices that can last years or in some cases a decade or more. For some analysts, the current rally is rekindling memories of the supercycle seen during China’s rise to economic heavyweight status beginning in the early 2000s. Commodities have experienced three other comparable cycles since the start of the 20th century. U.S. industrialization sparked the first in the early 1900s, global rearmament fueled another in the 1930s and the reindustrialization and reconstruction of Europe and Japan following the Second World War drove a third during the 1950s and 1960s.

From around 2002, China entered a phase of roaring economic growth, fueled by a rollout of modern infrastructure and cities on an unprecedented scale. Suppliers struggled to fulfill surging demand for natural resources. In commodities, there’s often a time lag to get the product where it’s wanted since adding capacity, such as opening a new mine, doesn’t happen overnight. For more than a decade, materials including iron ore were in tight supply. Copper, priced below $2,000 a ton for much of the 1990s, broke $10,000 and oil jumped from $20 a barrel to $140.

3. Who says this is another supercycle?

Among the bulls are analysts at JPMorgan Chase & Co. and Goldman Sachs Group Inc. The commodities rally will be a story of a “roaring 20s” post-pandemic economic recovery as well as ultra-loose monetary and fiscal policies, according to JPMorgan. Commodities may also jump as an unintended consequence of the fight against climate change, which threatens to constrain oil supplies while boosting demand for metals needed to build renewable energy infrastructure and manufacture batteries and electric vehicles, it said. Those include cobalt and lithium. Furthermore, commodities are typically viewed as a hedge against inflation, which has become more of a concern among investors.Play Video

Longer-term trends point to a cooling down for some materials. For example, the energy transition that heralds a bright new age for green metals such as copper would be built on the decline of oil. Even producers of iron ore, the biggest market of mined commodities, expect prices to weaken over time as Chinese demand starts to decline and new supply comes online. It’s an even bleaker outlook for coal, with producers looking to exit the market altogether as the world switches away from the heavy-polluting fuel. Iron ore, coal and oil were the chief beneficiaries of China’s industrial expansion. Those markets dwarf copper in scale.

5. What’s been happening with oil?

Prices collapsed in 2020, even turning negative at one point, but have recovered as demand rebounded more strongly than many had expected. Early in 2021, the Organization of the Petroleum Exporting Countries and its allies were holding back crude equivalent to about 10% of current global supply. Market fundamentals have shifted, especially in the U.S. with the emergence of shale oil. Haunting traditional producers is the prospect that a prolonged period of high prices would trigger a new flood of supply beyond OPEC’s control. Even so, some oil bulls aren’t ruling out the eventual return of prices above $100 a barrel.

6. Which other commodities are rising?

Copper was on a tear in early 2021 thanks to rapidly tightening physical markets as governments plow cash into electric-vehicle infrastructure and renewables. Goldman Sachs, BlackRock Inc., Citigroup Inc. and Bank of America Corp. saw the metal moving toward all-time highs. While agricultural commodities have their own particular dynamics, soybeans and corn have rallied to multiyear highs, driven by relentless buying from China as it rebuilds its hog herd following a devastating pig disease. Agricultural prices are more dependent on global economic and population growth, rather than the decarbonization trend underpinning excitement in metal